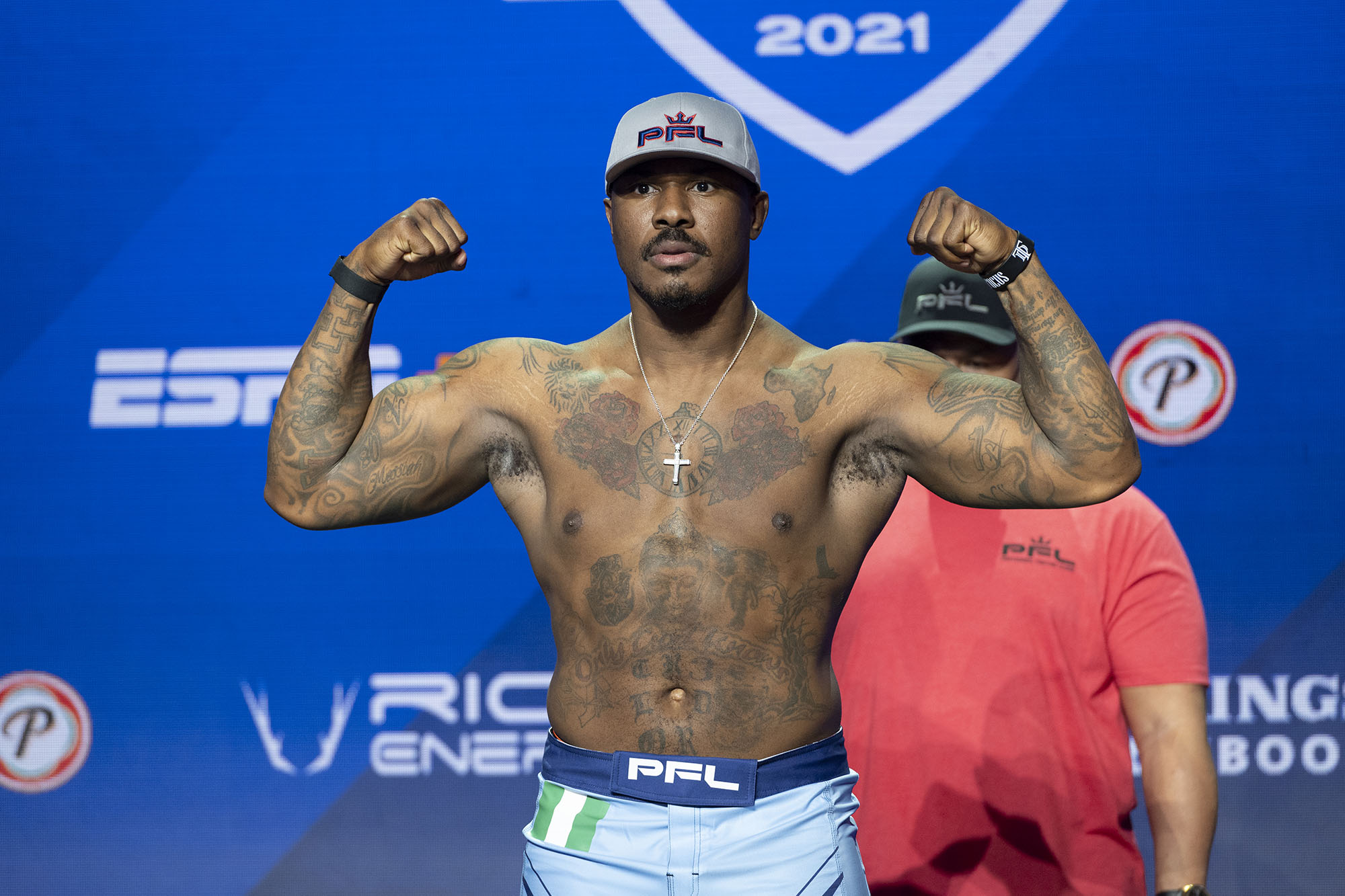 Just as one Usman has staked his claim as perhaps the pound-for-pound best fighter today, another Usman is about to make his first move on a bigger MMA stage.

Mohammed Usman, young brother to UFC welterweight champion Kamaru Usman, is a rising prospect in the sport. He will make his Professional Fighters League debut Thursday at Ocean Casino Resort in Atlantic City, N.J., in the first leg of the PFL regular season, when he’ll face Brandon Sayles as part of the ESPN-aired main card.

But don’t think of the younger Usman (7-1, five finishes) as the “little” brother. He’s a bona fide heavyweight who tipped the scales at 239 pounds on Wednesday. And don’t go in thinking he’s the type of heavyweight whose cardio falls off a cliff after a few minutes, if a finish doesn’t materialize.

“They call me ‘The Motor’ for a reason,” Usman told The Post via Zoom on Tuesday. “… My coaches always say to me that I move like a welterweight, a middleweight, and I’m walking around at 240, 245 [pounds].”

Relative to his highly accomplished brother, who last month punctuated his fourth title defense with an explosive knockout of Jorge Masvidal, 32-year-old Mohammed Usman still is early in a fighting career that comes after the end of his first professional athletic pursuit: football. In fact, the younger Usman did not even begin to train until more than a year after Kamaru won the 21st season of “The Ultimate Fighter,” kickstarting an unbeaten 14-fight-and-counting tenure competing in the UFC.

Kamaru Usman told The Post before the win over Masvidal on April 24 that he’s always both more excited and more nervous for Mohammed’s fights than his own. He also loves the fact that the heavyweight has found a home at the Colorado-based Elevation Fight Team, training alongside some of the top big men in the sport.

“His improvements have been outstanding,” Kamaru Usman said. “I’m watching him spar, and I’m like, ‘Wow!’ He shocks me every time I watch him spar. Being about to train with guys like Alistair Overeem, Curtis Blaydes and some of the guys at his gym, it’s incredible.”

Mohammed Usman, who like his brother was born in Nigeria but largely grew up in Texas, played defensive end at the NCAA FBS level, first at Houston and, after a stop at Navarro College in Texas, finishing up at Arizona. As a senior with the Wildcats in 2011, he saw action in 11 games, tallying 19 total tackles, one sack and one forced fumble.

While he harbored NFL dreams, those did not work out for him. He wound up playing professionally in Sweden for a time before moving on from the sport. But he appreciates the role football played in “[setting] me up on this journey” in MMA.

“When that door closed [on football], and I saw that my brother was having a lot of success [in MMA], and I looked at my body and I’m like, ‘I can run and jump, so why waste this perfectly beautiful body God blessed me with by sitting around or trying to get a desk job?’ ” Usman says with a laugh. “I said, ‘Let me go train, and let me go at it.’ And look where we’re at now: We’re here [in PFL].”

Usman, an accomplished high school wrestler in Texas once upon a time, began training toward a professional MMA career near the end of 2016, roughly around the time his brother picked up his third UFC victory after winning “TUF.” With just about five months of training in the sport, he jumped directly into the professional ranks with a first-round submission win in May 2017.

“Wow, you didn’t do any amateur fights?” Usman recalls being asked at the time.

At first, everything in the cage felt as if moving at warp speed for Usman, drawing a comparison to when starting out playing football, the sport he knew for so long.

“My eyes couldn’t calm down fast enough,” Usman said. “Like, you’re seeing someone in front of you, but you’re not really seeing them. You know what I mean? Your eyes can’t focus on the guy in front of you to be able to land what you want.

“So I feel like, over time, I’ve finally evolved my game to where I can actually see this opponent in front of me, move around, see my punches landing on him. So it’s just really being able to control that anxiety that you get in the cage. And that’s where I’ve gotten so much better at.”

With the early regional phase of his career over, Usman begins his run in a major promotion against the 40-year-old Sayles (5-1, four finishes), a U.S. Army Combatives instructor who has not competed in more than three years. Usman downplays his opponent’s more advanced age as a factor, instead praising the “mental fortitude” of Sayles.

Not that it matters to Usman, who believes his fighting style that’s predicated on advancing and being aggressive makes him different from Sayles’ previous opponents.

“I come forward. A lot of guys that he’s fought run and circle around. That’s not me,” Usman says. “As soon as we start that fight, I’m going straight into his chest. And either he’s gonna back up, or we’re gonna be in the middle slugging.”

While Mohammed Usman has a long way to go to catch up to his brother’s accolades, bank on the heavyweight Usman aiming to one-up him eventually. He describes all of his siblings (including brother Kashetu, a former collegiate soccer player, and sister Ashlynn, who played Division I volleyball) as competitors always looking to outdo one another. And he doesn’t mind at all pointing out one way he topped Kamaru athletically years back.

“We’ll go into the wrestling room in our high school, and he got, what, third in state. I went and got second in state. So you’ll see his name, and then you’ll see my name ahead of his,” Usman says with a proud grin. “We battle each other, and it brings out the best in me.

“Just the competitive nature of us and our family and just how we are, it’s the driving force behind everything we do, which is so competitive that we don’t want to lose or fail in anything.”